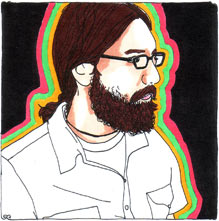 I was going to write a post about some great live sessions I've come across lately, but realised that there were far too many good ones to write about retrospectively, and that a great many of those came from the archives of one particular site.  So, to save time and to give a little gift to you, my dear readers, I present a profile of the Daytrotter project in its entirety.

The gist of the site is thus: bands touring the states take a couple of hours to record four tracks at the site's studio (Futureappletree Studio 1) that are then posted along with a article or review and some exclusive artwork (the site has several decent illustrators "on staff").  It's a simple idea, and one where the true genius is in the depth and breadth of the bands themselves.

Rather than point out specific sessions from their archives, I'll let you do some of your own recon. work, but to illustrate the quality of the (free) downloads on offer I'll post links to three song chosen by typing "daytrotter" into my iTunes and hitting the shuffle button:

Two Gallants - The Hand That Held Me Down

The Spinto track is a particularly good example of the joys of the Daytrotter sessions as it incorporates a "previously unrecorded" middle eight (read the article to hear the story behind it).  I'm sure there'll be plenty more sessions from these guys that I'll be compelled to post about, but for now keep yourselves sated by perusing their archives...